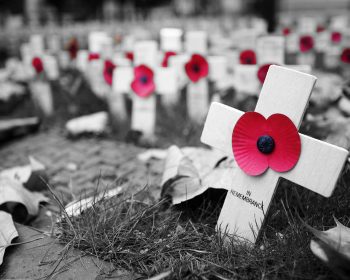 In commemoration and remembrance of the end of the First World War and the many millions who were killed or came home dreadfully wounded, Eastbourne has set up a website so we can remember our local soldiers – click here for more details. They have also placed pavement stickers around the town and we have one outside our shop. It is to remember our resident Harry Oakman.

Harry went to Christ Church School and worked at Messrs Campbell, Confectioners, Carlisle Road then with Messrs Sainsbury for nearly 4 years. He served with the Royal Army Medical Corps and the London Irish Rifles and was declared missing in 1916 but not confirmed that he had been killed until 1917. Killed in action near Arras on 9 October 1916, aged 25. He left a widow and a daughter.

Services to remember the fallen who lost their lives in conflicts will take place in Eastbourne over the weekend.

Sliding wardrobes... The height of sofistication!

Are you planning a walk in wardrobe?

Following on from the recent government announceme

"My wife and I are

Is the Kitchen the heart of your home?

Have you ever thought how your wardrobe would work

Country kitchen? We've got you!

Just look at this

Lest We Forget ❤️

"We were very impres

We have very ki

We will be celebrating our 10 year anniversary on

1 week to go until our 10 year celebrations!

10 years ago today, Annette and Simon opened up Ri

On Friday 5th November we w

We don't just to kitchens...we do bedrooms to!!

Sliding wardrobes… The height of sofistication!Contact us today for more information!📸 Volante wardrobes and furniture

Are you planning a walk in wardrobe?Contact us today to see how we can help!📸 Holcombe bedroom furniture

Following on from the recent government announcement face coverings will once again be mandatory in our showroom.We appreciate your cooperation.

⭐⭐ Five Star Friday ⭐⭐"My wife and I are delighted with the recent upgrade to our kitchen and utility room by Riggzy Complete Kitchen Solutions. The work was completed in one day, no mess and to a very high standard. The whole experience from booking an appointment to completion was stress free. Thank you guys for a great job. Highly recommended."

This website uses cookies to improve your experience while you navigate through the website. Out of these, the cookies that are categorized as necessary are stored on your browser as they are essential for the working of basic functionalities of the website. We also use third-party cookies that help us analyze and understand how you use this website. These cookies will be stored in your browser only with your consent. You also have the option to opt-out of these cookies. But opting out of some of these cookies may affect your browsing experience.
Necessary Always Enabled
Necessary cookies are absolutely essential for the website to function properly. This category only includes cookies that ensures basic functionalities and security features of the website. These cookies do not store any personal information.
Non-necessary
Any cookies that may not be particularly necessary for the website to function and is used specifically to collect user personal data via analytics, ads, other embedded contents are termed as non-necessary cookies. It is mandatory to procure user consent prior to running these cookies on your website.
SAVE & ACCEPT